It is well known that the transport capacity of the Danube is poorly utilized. In addition, unlike the Rhine, the Danube is not a regulated waterway. Furthermore, it is a much longer and wider river with several shallow sectors. Consequently, transport infrastructure enhancement would require extensive waterway engineering. This could severely damage the eco-system of the river and adjacent areas and, in the long run, also harm the economy of the region. As a means to increase waterborne transport with simultaneous preservation of region’s natural resources, Green Chain would have sought to introduce an innovative approach to ship design.

Four most important impacts of the Green Chain could be distinguished:

The Green Chain project would have aimed to accomplish the following goals:

Green Chain would have focused on innovative designs of shallow-draught inland vessels and sea-river ships adjusted to the Danube waterway network and the Black Sea coastal zones. The project initiative aimed to provide customized ships, tailored in accordance to the present navigation conditions on particular waterways (river-adapted ships).

The project would also have offered concepts for sustainable waterway development as well as for improvement of port infrastructure and enhanced port management and operation. A significant element of the project was the evaluation of economic viability of developed designs and concepts (including costs of new-building of innovative ships) and quantitative and qualitative assessment of their influence on modal shift, emitted CO2, internal and external costs of transport, environment, etc. Based on the results of the evaluation, and taking also into account existing national and regional policies, a strategy for adequate policy framework that would enable introduction of the new designs would have been developed.

The project addressed all Danube riparian states and aimed to provide solutions viable for the entire Danube Region.

The Green Chain team itself would have gathered respectable institutions in the fields of ship design and ship hydrodynamics, waterway engineering, port management and operation, transport economics and transport policy development from two of the most important European waterway networks: the Danube – Black Sea basin and the Rhine – North Sea coastal zone region.

The project was not realised.

In addition, the project coordinator NEA would have subcontracted the MERCURIUS Shipyard, the Dutch shipping and shipbuilding company which also runs a shipyard in Serbia, specialized in new-building of inland vessels.

The Green Chain goals are consistent with the overall waterborne transport development strategy as defined by the NAIADES Action Programme and the WATERBORNE Technology Platform.

The NAIADES Action Programme sets inland fleet innovation as one of five main strategic areas, calls for improvement of logistics efficiency, safety and environmental performance of IWT and emphasizes the importance of vessels operating in low water levels, sea-river ships and vessel intended for small waterways. The consideration of possibilities for adapting the ship design to the present navigation conditions is also indicated as a research direction.

Throughout its execution, the Green Chain project would have launched a number of actions envisaged by the WATERBORNE Technology Platform Strategic Research Agenda. For instance, WATERBORNE TP indicates risk-based analysis for cost-efficient safety, propulsion efficiency and low emission vessels, as some of the R&D and innovation priorities. The Green Chain project would have utilised risk-based tools for the safety assessment of innovative ships and advocated for the introduction of risk-based designs, using practical examples. The project would have incorporated the research on advanced greening technologies including emission reduction techniques. Furthermore, the project would have contributed to the development of energy-efficiency indicators of the inland vessel design, etc.

The Green Chain project idea addressed three (out of four) pillars of the EU Strategy for Danube Region: (1) Connecting the Danube Region (design of innovative shallow-draught vessels that should enable efficient connections between the Black Sea maritime harbours and inland ports on the Danube and on the secondary waterway network; concepts for improvement of port infrastructure, management and operation); (2) Protecting the Environment (concepts for sustainable waterway development and design of river-adapted ships) and (3) Building Prosperity (two-way knowledge transfer between the Rhine and the Danube basin; transferability of technology and policy).

In the first phase of the project, an overview of regulations relevant for each Research Activity would have been made. Technical regulations are very important for the project execution, so in addition to current regulations, the ones that would have come into force in the near future would have been taken into account as well. Transport policy research group would also have examined taxes and subsidies related to inland waterway transport and Black Sea coastal shipping of the Danube neighbouring countries, as well as legal restrictions for waterway and port infrastructure development.

The Green Chain team would not have started from scratch, but relied heavily on experience gained through a number of European and national projects executed by partners so far. Also, collaboration within the project would have enabled the diffusion of results accomplished in the national (Serbian, Romanian, Belgian, etc.) and bilateral (Bulgarian-Belgian, Serbian-Dutch) projects to a broader, European-level community. Some examples of projects relevant for the proposed research are given below.

NEA was involved in developing the national transport master plans of Serbia, Bulgaria, and Romania. NEA has executed many inland waterway projects in the Danube region. Furthermore, the staff of NEA and BU has also cooperated in EC-funded projects CREATING and IMPRINT-NET (both FP6).

The Department of Naval Architecture (University of Belgrade – Faculty of Mechanical Engineering) has a long history of continuous technical improvement of the Danube fleet. Introduction of push-boat technology on the Danube is one of the milestones of Department’s activities. Over the past 15 years, Department has continuously participated in the Technology Development Programme of the Serbian Ministry of Science with research projects on development of new generation of inland Ro-Ro and container vessels. Furthermore, the members of BU have taken part in several international research projects. In CREATING (FP6 project), the only vessel intended for the Danube (out of four cases) was mostly developed by the BU team member, Prof. Dejan Radojčić. EUDET (FP4), COVEDA and MUTAND are some of the Danube ship technology related projects carried out by the members of the Department. Another important study on shallow-draught ship design “Environmentally friendly inland waterway ship design for the Danube River” commissioned by WWF was accomplished in 2009.

STRATEC has accomplished a number of studies in the field of waterborne freight transport, dealing with socio-economic evaluation and cost-effectiveness of infrastructure upgrade, such as:

In recent years, through the Romanian Development Programme for the Danube ports, Galati Free Zone has expanded its on-site port management know-how by completing several studies and projects related to the improvement of port facilities, infrastructure and operational activities (design and construction of new terminals, construction of a ship dismantling workshop, development of pipelines fabrication line, vertical quay arrangement for inland and seagoing ships, etc.). Furthermore, Galati Free Zone has participated or assisted in EU-funded projects, such as WANDA and CAPRICO.

Further examples include: ongoing bilateral cooperation between Flanders Hydraulics and Bulgarian Ship Hydrodynamics Centre in the area of inland navigation (particularly in shallow waters), as well as transfer of knowledge on estuary navigation from Ghent University to the University of Belgrade, supported by Basileus programme in 2009, etc. 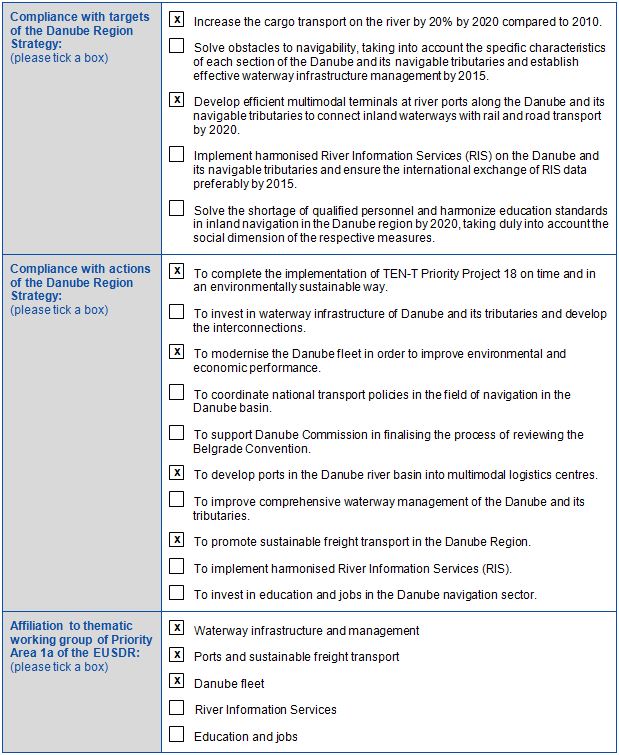