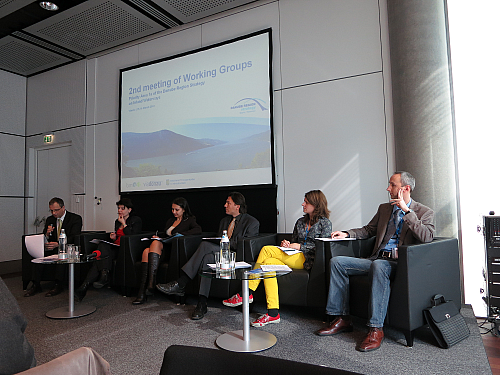 On 15 and 16 March, about 70 experts met in Vienna for the second meeting of the Working Groups for Priority Area 1a of the EU Danube Region Strategy (EUSDR) in order to discuss the implementation of the Strategy’s actions aimed at the improvement of mobility and multimodality on the inland waterways in the Danube region. Stakeholders participating in the meeting included the navigation industry (vessel owner-operators, shippers, ports), representatives from ministries of the Danube countries and the European Commission, international industry associations, national and local authorities, inter-governmental and non-governmental organizations, universities and research institutions.

In their role as Priority Area Coordinators, the Romanian Ministry of Transport and Infrastructure and the Austrian Federal Ministry for Transport, Innovation and Technology, together with the Steering Group of EUSDR’s Priority Area 1a established five thematic Working Groups in order to involve key stakeholders in the process of implementing the Strategy along the targets set for inland waterways in the Danube basin.

The second meeting of the Working Groups focussed on specific road maps proposed by the Priority Area Coordinators for the implementation of actions in the fields of waterway infrastructure, integrative waterway management, ports and sustainable freight transport, fleet modernization, River Information Services as well as education and jobs. These topics were discussed on round tables on the basis of written feedback provided by the participants on the draft road maps and were rounded off by a general discussion in the plenum.

The results of the meeting will be reported to the Steering Group of Priority Area 1a, in which the 14 Danube countries, three Directorates-General of the European Commission, three river commissions and several transnational organisations are represented. Based on the approval of the road maps by the Steering Group, the Priority Area Coordinators will draft a first progress report for the European Commission on the implementation of the Strategy concerning inland waterways. The progress report has to be finalised by June 2012. To complement the expert forum of Working Groups with a broader involvement of stakeholders, a first Annual Stakeholder Conference will be organized on the 24th and 25th of May 2012 at in Bucharest.

Detailed information on the 2nd meeting of the Working Groups (including Meeting Minutes and accompanying documents) is available here.