“ACTION 6: Contribute to the simplification, harmonisation and digitalisation of administrative processes”

The Working Group on “Administrative Processes” started in 2013 and is since then fully dedicated to facilitate and improve control processes, especially in the field of border controls, benefitting both the shipping sector and control authorities. The reason is that within the broad field of administrative processes, border controls have always been a main source of delays and additional costs for inland waterway transport on the multinational Danube River. In order to ensure the freedom of movement of persons and goods as foreseen in the EU treaties harmonised, simple and time-efficient control processes need to be in place at the EU and Schengen borders.

The activities of the Working Group are based on a joint effort of Priority Area 1a of the European Strategy for the Danube Region which is concerned with further developing inland waterways and Priority Area 11, which aims at enhancing transnational cooperation to improve security and to tackle serious and organised crime.

Since 2013, a good cooperation between PA1a and PA11 – Security has been established and is tackling the

Find a summary of our activities and success stories also in our Flyer.

The joint Working Group of PA1a (Inland Waterways) and PA11 (Security) found approximately 50 single border control documents being in use and a myriad of different control processes in the Danube riparian states. To simplify and make information uniformly available to the shipping sector and other interested users, a Practical Manual on Border Controls has been developed – the first one of its kind. 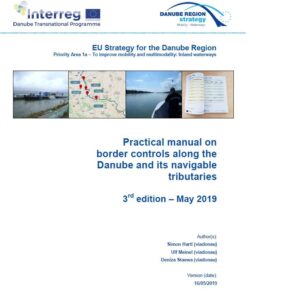 The manual helps to improve transparency of border control processes and has the potential to facilitate the market entry of newcomers and to reduce disadvantages caused by lack of information. To provide accurate information, the manual is updated regularly and published on this website.

We appreciate your feedback on the manual and welcome any improvements you may suggest (PA1a@viadonau.org).

By comparing the control procedures in the Danube region, it has become evident that harmonisation is important to decrease variations in control procedures along the Danube. With the aim to tackle this issue, the joint Working Group of PA1a (Inland Waterways) and PA11 (Security) developed a set of so-called Danube Navigation Standard Forms (DAVID). Using the expertise of stakeholders from the shipping sector and control authorities, the data fields of three often used forms (arrival and departure forms, crew lists and passenger lists) were harmonised in an international effort.

In 2018, the Working Group reached an agreement on the final first set of so-called Danube Navigation Standard Forms (DAVID):

The DAVID forms shall replace respective national forms required during controls at Schengen external borders. Replacing the previously used forms with the harmonised DAVID forms is a national responsibility and involves administrative adjustments on a national level.

The introduction of the DAVID forms in all countries at and outside Schengen external borders is completed.

Hungary, Croatia, Serbia, Bulgaria and Ukraine introduced the DAVID forms in 2020. Romania and the Republic of Moldova followed in 2022. The forms are available for download on the websites of the respective Ministries: 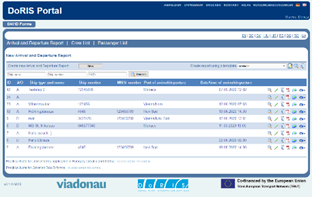 In parallel, the Working Group concentrates on the digitalisation of the harmonised set of DAVID forms. The goal is to further reduce the administrative efforts and to save time for the ship’s crews during the completion of the DAVID forms, making Danube shipping even more attractive for existing and potential new customers.

In coordination with the Working Group on “Administrative Processes”, viadonau offers the DAVID Creator in the DoRIS portal (https://portal.doris-info.at/IRIS_WEB/). The application marks the first milestone in the digitalisation efforts of the DAVID forms.

In accordance with the national introduction of DAVID forms, the DAVID Creator enables to save the forms as PDF in following language formats dedicated to the respective national control authorities:

More information on the DAVID Creator can be found in the following Manual.

For registration, please send an e-mail to: DoRIS-Info@viadonau.org

The comprehensive digitalisation of (border) control forms takes place in the frame of the RIS COMEX project (co-financed in the Connecting Europe Facility). As an upgrade to the DAVID Creator, users will be able to send all required control forms to the relevant control authorities directly from the Common Electronic Reporting System (short: “CEERIS”). Following the „single data entry“ and „report only once“ principle, users will benefit from enormous time-savings. 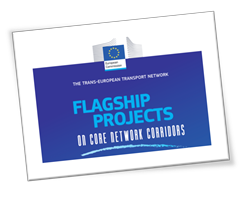 The joint Working Group of PA1a and PA11, as well as the RIS COMEX and the already concluded DANTE project form together a TEN-T Corridor Flagship Project, that supports the transport policy objective towards digitalisation of administrative procedures on inland waterways.

The comprehensive digitalisation of (border) control forms took place in the frame of the RIS COMEX project (co-financed in the Connecting Europe Facility). As part of RIS COMEX, the new Central and Eastern European Reporting Information System (CEERIS https://www.ceeris.eu) was developed as a joint initiative of 8 countries. It enables vessel operators navigating in the Danube corridor and the Elbe river in Czech Republic to digitally fulfil all reporting requirements for a specific inland waterway transport in participating countries by “reporting only once” with “single entering of data” – including, of course, the DAVID Forms. Thereby, users will benefit from enormous time-savings.

With the official introduction of CEERIS, the DAVID Creator, which fulfilled the digital creation of DAVID Forms on an interim basis, will be replaced.

CEERIS can be used not only by skippers but also by the authorities and the logistics sector.

This results in the following benefits for the authorities:

Logistics partners benefit from CEERIS as ship owners and fleet operators can share their data with them:

Further information can be found in the CEERIS flyer on the RIS COMEX website https://www.riscomex.eu/.

Who can use CEERIS for reporting?

CEERIS is free of charge and can be used by anyone. The privacy of all users is guaranteed.

Finally, all EuRIS users with a successfully claimed vessel or granted reporting rights for a vessel can automatically access the CEERIS platform at https://www.ceeris.eu with their EuRIS credentials through a single sign-on principle to report for their voyages.

The recommendations were jointly developed by Priority Area 1a „Inland waterways“ and Priority Area 11 „Security“ of the EU Strategy for the Danube Region to set impulses for efficient and transparent border control procedures. They form the basis for the activities of this joint Working Group between the shipping sector, the responsible control authorities and other relevant decision makers.

The recommendations also address shipping companies and vessel operators who are encouraged to bring in their experiences and use the provided information for a better preparation of controls. The implementation of the included work programme will allow to speed up long-winded procedures based on the simplification, harmonisation and digitalisation of controls.

Full report: Recommendations for improved border controls along the Danube and its navigable tributaries