In the last years a joint Working Group of Priority Areas 1a (Inland Waterways) and 11 (Security) of the EU’s Danube Region Strategy developed a set of so-called Danube Navigation Standard Forms (DAVID). Using the expertise of stakeholders from the shipping sector and control authorities, the data fields of three often used forms (arrival and departure forms, crew lists and passenger lists) were harmonised in an international effort. In the first phase Hungary, Croatia and Serbia introduced the DAVID forms in control procedures thereby replacing the national forms applied until then. Romania, Bulgaria, Ukraine and Moldova – the four other Danube riparian states – intend to follow suit until the end of 2021 latest. 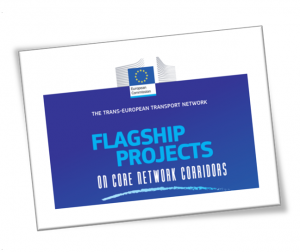 The Community Customs Code requires that control procedures should be aligned and the number of procedures reduced to those that are economically justified. Acting on this maxim a joint Working Group of stakeholders from the shipping sector and control authorities recently reached a major step in ensuring efficient border control procedures in the Danube region.

Analyses of the joint Working Group demonstrated that numerous requests for data are duplicated, different forms are in use in different countries and that multiple controls can be observed. The first step in the developmental path was therefore to agree on the elimination of superfluous data requests.

The next challenge was to screen and streamline the different border control forms in use along the entire Danube. In order not to lose the thread, the efforts of the Working Group focused on three often used forms: arrival and departure forms, crew lists and passenger lists. All requested data fields on national control documents were analysed and duplications between various forms identified. The synchronised application of a first set of so-called Danube Navigation Standard Forms (DAVID) was recently started with its introduction in Hungary, Croatia and Serbia.

In parallel to the anchoring and application of the already harmonised set of DAVID forms, the RIS COMEX project (co-financed in the Connecting Europe Facility) will specify the required steps to digitalise the submission of DAVID forms based on the „single data entry“ and „report only once“ principle. The joint Working Group of PA1a and PA11, as well as the RIS COMEX and the already concluded DANTE project form together a TEN-T Corridor Flagship Project, that supports the transport policy objective towards digitalisation of administrative procedures on inland waterways.

As a result, Danube navigation will become more attractive for potential customers as ship crews can save time and concentrate on their actual job: Carrying cargo from A to B using the most environmentally friendly mode of transport.

The harmonised DAVID forms are available for download on the websites of the respective Ministries:

Ministry for Innovation and Technology of Hungary – National Transport Authority

Ministry of the Sea, Transport and Infrastructure of the Republic of Croatia

link to DAVID forms in hr/en

Ministry of Construction, Transport and Infrastructure of the Republic of Serbia

link to DAVID forms in rs/en