The project which is under implementation now was approved under the CEF-Transport programme. It is the implementation of the Study “High Performance Green Port Giurgiu – 2012-EU-18089-S” funded under the TEN-T programme. The Study was finalized in August 2015 and represents stage 1 of the transformation of Free Zone Port Giurgiu into a High Performance Green Port. The study provides the preparatory work needed for the upgrade of the road, rail and port infrastructure, together with the building of an intermodal logistics terminal.

The action being implemented now represents Stage II and is deploying the infrastructure as “works project”. In addition, the action includes the development of the supply management system, the training of staff members and the environmental certification of the Port after the works have been performed.

The application was filed to the CEF/MAP Call 2014 and it addressed Funding Objective 4, Priority 1 as “works”. The project was approved under the CEF-Transport programme.

Giurgiu is the closest Danube port location (only 66 km distance) serving Bucharest, Romania’s capital and the adjoining region. The Free Zone Port is located on the TEN-T Rhine-Danube core network corridor. The project is one of common interest with high relevance for the trans-European transport network. The project will have the following results:

The project is in line with operational objectives set in the Romanian General Master Plan for Transport in regards to inland navigation. It is included in the list of pre-identified sections and projects stipulated in Annex I, Part I.2 of the CEF Regulation and also addresses key areas of intervention of the Naiades II policy framework meant to reinforce the contribution of the inland waterways and ports to a sustainable European Freight transport network namely developing quality infrastructure, improving the environmental quality of the port operations and high-lighting the need for skilled workforce.

The project is designed to transform Giurgiu Free Zone Port into a High Performance Green Port by:

The project is divided into 4 activities:

Activity 1 deals with all the preparatory work needed to start, implement and finalize the project in line with the terms and conditions required by the funding programme. It also displays the cooperation between public & private entities when carrying out infrastructure investments that will generate additional jobs and economic growth in the area. The communication and dissemination tasks related to the project are also included in this activity.

Activity 2 includes all the works on the infrastructure elements that are being developed within the project. These elements have been identified and technical solutions for their improvement have been developed and assessed within the High Performance Green Port Giurgiu project-2012-EU-18089-S funded under the TEN-T program.  Based on the feasibility studies previously elaborated the works are being carried out in compliance with the Romanian legislation in force.

Work is split into several sub-activities:

All project partners carry out the preparatory stages before starting the works for the infrastructure elements they are responsible for (install facilities for the workers, carry out demolitions and obtain all necessary work permits required in line with the Romanian legislation).

ILR Logistica Romania SRL which acts as coordinator of the activity is responsible for the building of the intermodal logistics terminal within Giurgiu Free Port. These works also include:

All these new infrastructure elements will also be connected to the utilities networks and all the work is performed in the section dedicated to the intermodal logistics terminal.

Giurgiu Municipality is in charge of building 1 railway level crossing to facilitate access to the intermodal terminal and help with traffic decongestion.

Activity 3 deals with the set-up of the supply chain within the intermodal terminal. To complement this design the warehouse management software is also implemented. Training for the staff members and test operations are also conducted.

Activity 4 includes the environmental review of the High Performance Green Port upon the completion of the works and the installation of the new energy-efficient loading/unloading equipment. The port benefits from a new environmental policy with clearly defined objectives & targets as well as the measures and responsibilities to meet them. The environmental audit of the port is performed in order to comply with the requirements of the EU EMAS Regulation.

The port is located on the TEN T Rhine-Danube core network corridor. The project is one of common interest with high relevance for the trans-European transport network:

The project addresses key priorities of the European Union transport policy such as:

High Performance Green Port Giurgiu – 2012-EU-18089-S (TEN-T MAP 2012 Application) – All preparatory studies required for the implementation of the works under the current project have been elaborated within the above mentioned TEN-T action. This action was completed in August 2015. 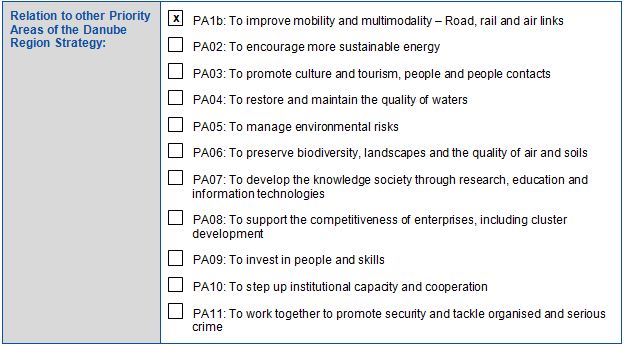 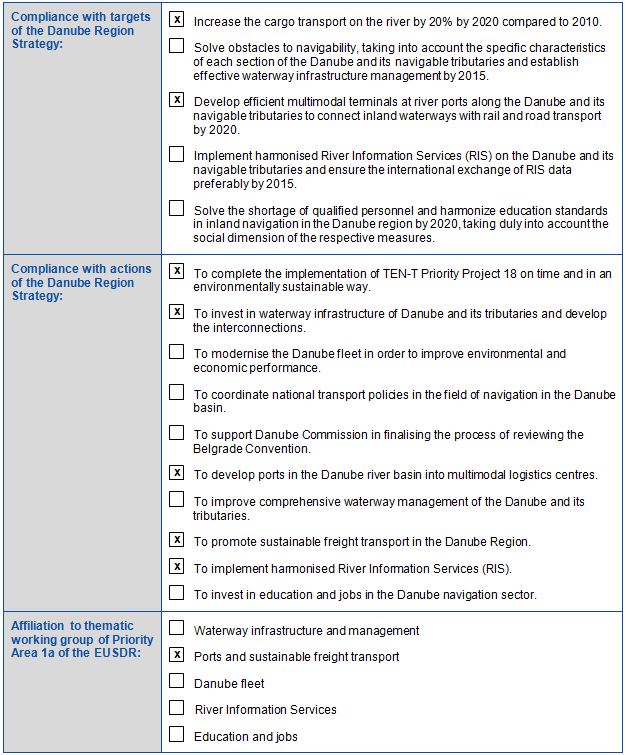