IRIS Europe II as international multi-beneficiary project contributed significantly to fulfilling the objectives as laid down in Priority Area 1a of the EU Strategy for the Danube Region – to improve mobility and multimodality on inland waterways.

Besides partners from the Rhine-Main-Scheldt region, all Danube countries were involved either as fully financed or as cooperation partners within IRIS Europe II. The beneficiaries of IRIS Europe II were the European Union Member States, represented by their Ministries of Transport.

IRIS Europe II was a multi-beneficiary TEN-T project focusing on further enhancement and fine-tuning of RIS key technologies, services and applications; in particular the (pilot) implementation of new harmonized RIS services especially at the level of fairway, traffic and transport related RIS services, services based upon multilateral legal agreements and definitions of service levels for RIS, the provision of feedback and contribution to the maintenance and amendment of technical specifications. Thus, IRIS Europe II significantly contributed to a harmonized RIS implementation at European level.

The main objectives of the project were the following:

Activity 3: Pilot implementation and pilot operation of international RIS data exchange among the national RIS Centres as well as with the European services like the European Hull Database. Especially the technical and legal challenges were considered within this activity.

Activity 4: Definition of an approach for the definition and introduction of minimum quality requirements for River Information Services.

Direct beneficiaries are the Fairway, Traffic and RIS Authorities and the related RIS Providers of the participating countries. Indirect beneficiaries of the further enhancement of River Information Services within IRIS Europe II are the commercial users of the waterway, as they will receive value added services, increased interoperability and quality of River Information Services.

In January 2006, the multi-annual European Action Programme for Inland Waterway Transport (NAIADES) which aims at promoting inland waterway transport in Europe was launched. It includes recommendations for actions to be taken between 2006 and 2013 by the European Community, its Member States, River Commissions and the inland navigation sector. The implementation of RIS is an important element of the strategic area ‘Infrastructure’. Several Member States have launched their national NAIADES actions plans (e.g. the NAP in Austria, NAP in Slovakia) and the project is seen by its beneficiaries and cooperation partners as the driving force for the further development and implementation of interoperable RIS in Europe.

On 08.12.2010 the European Commission published its communication on the European Union Strategy for the Danube Region (COM 2010/715). The Strategy provides a sustainable framework for policy integration and coherent development of the Danube Region. It sets out priority actions by means of a comprehensive Action Plan that is based on four main pillars. It is stated in the Action Plan that once an action or project is included in the Action Plan, it should be implemented by the countries and stakeholders concerned.

“To implement harmonised River Information Services (RIS)” is one of the key actions within the priority area “To improve mobility and multimodality”, whereas the IRIS Europe initiative is mentioned as a concrete project example “To build on the IRIS Europe projects – support the co-ordinated implementation of River Information Services (RIS) in Europe” (cf. page 13, Action Plan).

Within the Freight Transport Logistics Action Plan the European Commission has outlined the concept of e-Freight. This concept is a vision of a paper-free, electronic flow of information accompanying the physical flow of goods with a paperless trail built by information and communication technologies. It includes the ability to track and trace freight across transport modes and to automate the exchange of content related data for regulatory or commercial purposes. Freight should be identifiable and locatable regardless of the mode used to transport it.

For this to happen, standard interfaces within the various transport modes are required to be interoperable across modes. River Information Services form an important element of e-Freight.

In Austria for instance, the inland navigation policy relied on the National Action Plan (NAP) on Danube Navigation – a dynamic planning and decision-making instrument that determined Austrian waterway transport up to 2015. In 2015 the follow-up programme “Action Programme Danube until 2022” was adopted. The NAP and now the Action Programme are based on a package of measures, which were drawn up upon the order of the Austrian Ministry of Transport, Innovation and Technology by via donau in close co-operation with all other relevant players of the field. The NAP and now the Action Programme stress the importance of inland navigation for transport policy. Inland navigation was also made one of the core issues of Austria’s EU Presidency in the first half of 2006.

Among others, the most important legislative acts are:

The results, conclusions & recommendations as well as observations of the preceding project IRIS Europe (Jan. 2006 – Dec. 2008) were considered and activities were partly continued. 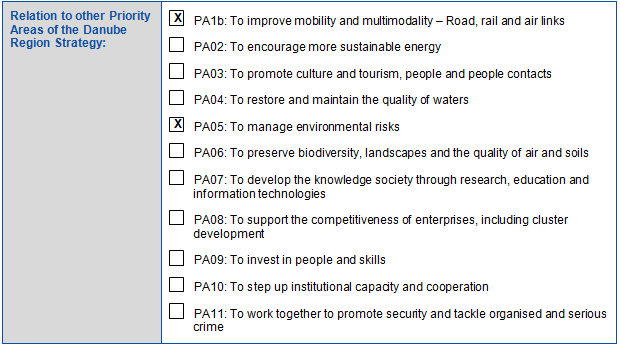 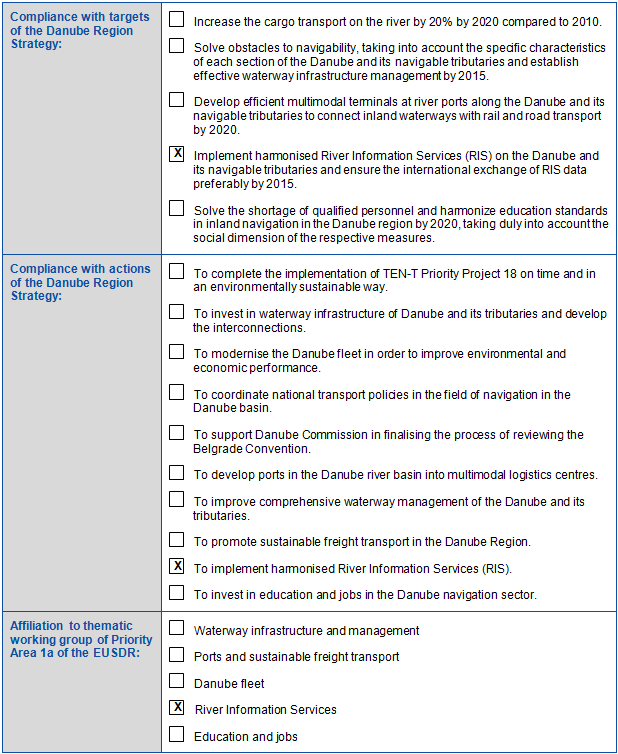 Technical challenges: Deployment of onboard equipment and shore-based infrastructure as well as validation of technical feasibility, interoperability and compatibility of systems, services and applications.

Organisational challenges: Coordinated improvement of work flows from the production of basic data up to the provision of services towards the end users.