The proposed project represents the construction of multi-modal transport infrastructure required for the deployment of a state-of-the-art-technology terminal for various oil products (hydrocarbons) with a storage capacity of 512.000cbm on the artificial island and the neighbouring shore line in the Port of Constanta.

MAINTopic was not approved for funding under the CEF call which it was submitted to. MAINTopiC only represents a project idea.

Constanta is the main maritime port in Romania, with a strategic location that favours the development of a multi-modal terminal to be used for hydrocarbons.  The Port is located on the TEN-T Rhine-Danube core network corridor. Constanta has also the strong point of being the only Black Sea Port with a duty free zone and sufficient water depth to allow the access of heavy tonnage vessels into its basins. The implementation of the proposed project at this location would have had the following results:

The project would have been in line with the general and specific objectives set in the Inter-Modal Strategy Romania 2000 and also those of the General Master Plan for Transport. The objectives of the Constanta Port Master-Plan are also complied with. The Action is included in the list of pre-identified sections and projects stipulated in Annex I, Part I.2 of the CEF-Regulation.

The project was designed to execute the preparatory infrastructure works to transform the artificial island and the neighbouring shoreline into a multi-modal platform for hydrocarbons in the southern part of Constanta Port. The goal was to:

As MAINTopic was not approved for funding under the CEF call it was submitted, the following project description will therefore not be implemented and only represents a project idea:

The project should have been divided into 3 activities:

Activity 1 was foreseen to include all the project management tasks needed for the successful implementation and completion of the project. Dissemination activities were also foreseen in line with the requirements of the funding program.

Activity 2 would have included all the works on the infrastructure elements that are to be developed within the project.

Work would have been split into several sub-activities:

The artificial island in the Port of Constanta was created when the Danube-Black Sea Canal was excavated in the ridge area (Murfatlar-Agigea). The excavated material was used to make up this new geographic formation that has never been used before for industrial or economic purposes. The shore-line next to the island is in a similar state and both locations require extensive site preparation activities. These relate to levelling & ramming the land. In case of the island additional filling and reinforcement operations would be necessary. Once these steps would have been made, there would also have been preparations needed for starting the works on the transport infrastructure. These would have included installing facilities for the workers, connecting to the energy & water supply network, fencing of the construction site, etc.

The waterway infrastructure was proposed to be located on the island. It would have consisted of the building of 2 new berths in the northern side of the island. Additional works performed would have included:

The two sites making up the multi-modal platform were proposed to be linked by:

1. Underwater cables and pipelines
The pipeline crossing should have been buried in the soil on the port basin bottom, which implies dredging a channel, placing pipelines, filling the ditch, providing a raw stone protection. Anchoring would have been restricted in this area for sea and river vessels.

Activity 3 is focused on the preparatory work performed after the completion of the constructions in order to start the operations. The training of the staff members and the establishment of all internal procedures were foreseen to be dealt with in this activity. In addition to this, several assessments were foreseen in order to establish the socio-economic and environmental impact of the project and thus adjust the next steps needed for the future development of the platform.

The port is located on the TEN-T Rhine-Danube core network corridor. The project would have been one of common interest with high relevance for the trans-European transport network:

The project was not realised.
A timeframe of three and a half years had been proposed (2015 – 2018). The project proposal was submitted under the Multi-annual CEF call 2014- Funding Objective 4 – related to the Cohesion Fund. Submission deadline: 26.02.2015.

Total budget: 81,975,000 EUR
EU funds: 69,678,750 EUR (co-funding from CEF was requested but not provided)
Private funds: 12,296,250 EUR (financing not covered by EU grant should have been covered by equity and loan facilities)
The project would not have required public finance due to the concession model.

No additional partners would have been involved.

The proposed project takes into account the plans included in the following projects that are promoted for implementation by Constanta Port Administration:

The project would have addressed key priorities of the European Union economy and transport policy such as: 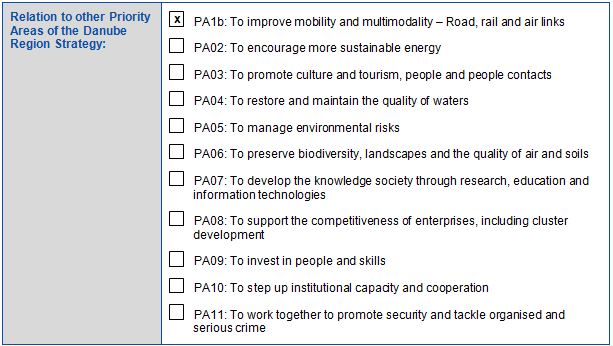 The deployment of the terminal for hydrocarbons including all storage facilities needed for safe and efficient operations. The project would have initiated for future expansions of the platform by performing land-reclamation works on the island which would have been used for investment in ad-joint processing industries, chemical industry and gas industry. The infrastructure investment would also support the realization of a small scale LNG terminal in the Port of Constanta.

The procedure regarding the concession of the land needed for the development of the multi-modal platform had already been initiated. Constanta Port Administration is the current manager of the land (island & shore-line). This public entity had been working with the Romanian Ministry of Transport in order to launch the tendering procedure for the award of the concession contract regarding the performance of these public works. The concession for the public works is awarded for a period of 49 years. XTANK REFINING SA closely cooperated with Constanta Port Administration for the development of the project. All required technical feasibility studies for the investment into the infrastructure of the terminal have been prepared by XTANK REFINING SA. Several million Euros have been invested in order to bid for the concession.