550 million tonnes of freight were moved on European inland waterways in 2018. Along the whole TEN-T core network corridor “Rhine-Danube”, the inland waterway transport performance accounted for 135 billion ton-kilometres in 2018. Navigation on the European Inland waterways is highly internationalised, as 75% of EU waterway traffic crosses borders. Existing bottlenecks and unreliable transport infrastructure in one country have significant negative impacts on the whole Danube corridor.

Despite the well-known advantages of Inland Waterway Transport compared to other transport modes, a stable loss in market share is taking place. A major driver for the losses is seen in lacking reliability of the waterway infrastructure and existing bottlenecks – such as insufficient fairway depths and widths or outdated infrastructure in mooring places or at locks. These obstacles usually have an international dimension due to average transport distances along the Danube of around 600 km.

The shortcomings regarding infrastructure represent a severe threat to the success of waterway transport in the Danube corridor and all over Europe. Consequently, achieving some of the main European transport policy goals is at risk if these shortcomings are not tackled.

The general objectives of the trans-European network are to contribute to:

Specific inland waterways transport infrastructure requirements include (among others) the following targets:

The proposed Action represents a major step in the implementation of the Corridor Work Plan and will trigger additional investments.

Regulation (EU) No 1315/2013 sets minimum requirements for rivers and canals to be reached by 2030 and requires Member States to maintain a Good Navigation Status thereafter. In line with these requirements, the proposed Action will prepare the foundation for “FAIRway Danube 2”, the planned multibeneficiary action under CEF2 as of 2021, which builds on the CEF-funded flagship action “FAIRway Danube”. “FAIRway Danube” has already been delivering tangible results in 6 Danube countries since 2015. The proposed Action will give a significant impetus to the further acceleration of inland waterway works in the Rhine-Danube Corridor.

The project addresses the Core Network Corridor Rhine – Danube (in particular the pre-identified projects Danube waterway from Kehlheim – Consţanta/Midia/Sulina and Sava river). 42% of the navigable Danube and large parts of the Sava constitute state borders. With national stretches between 138 and 1,075km and average transport distances above 600km on the Danube,
actions related to fairway conditions and waterway infrastructure necessarily have to be of a cross border nature.

Due to the absence of alternative routes, infrastructure limitations on the common Serbian-Croatian Danube stretch affect the whole Danube waterway axis. Thus, they represent a threat to the industries in the Rhine-Danube Corridor and need to be eliminated. For example, the Austrian section of the Danube is used by all vessels navigating from the Upper Danube to towards the Middle and Lower Danube and vice versa (and thus sailing on the Croatian/Serbian common stretch) with an average 7,2 million transported tons in 2018 (export, import and transit of
goods). In 2017, 21% of the goods transported on inland vessels in Austria were exported to or imported from Serbia, Rumania, Bulgaria, Moldova or the Ukraine. In addition, cruises between Germany and the Danube Delta are very popular with tourists and show enormous growth rates. It is thus essential to implement activities to upgrade the common Serbian-Croatian Danube stretch.

The Activities within the project will also prepare the foundation for “FAIRway Danube 2”, the planned multi-beneficiary action under CEF2 as of 2021. Therefore, they are relevant for all countries along the Danube waterway. 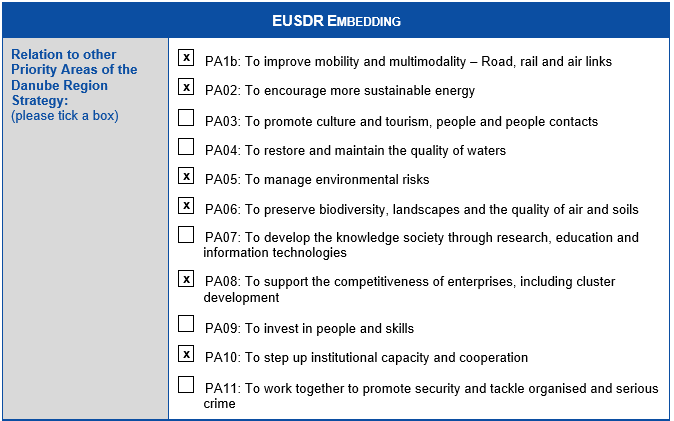 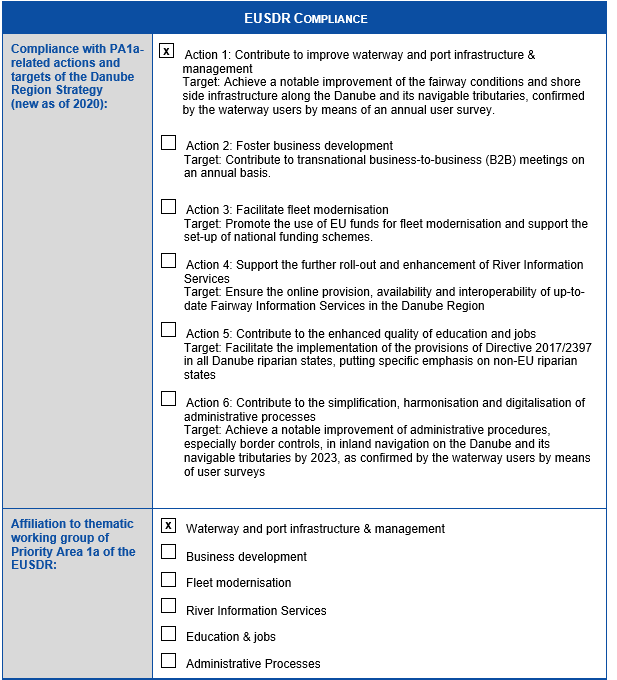