Upgrade of the Danube between Straubing and Vilshofen: Study for design, approval planning and public consultation within the frame of the planning approval procedure for subsection 1 (Straubing–Deggendorf)

The German federal waterway Danube between Straubing and Vilshofen in Lower Bavaria is a major bottleneck of the Trans-European Rhine/Meuse-Main-Danube inland waterway axis in particular with regard to draught. While the rest of the waterway axis has been adapted to 2.5 m draught almost all year round, this value is only attainable 144 days per year for the (free flowing) section from Straubing to Vilshofen due to alternating water levels. In low water periods only 1.6 m draught (or less) is possible.

A variant study (conducted 2008-2013) compared the two remaining variants (named A and C2.80) regarding impacts on navigation and environment in order to provide a secure basis for an informed political decision. At the same time, the existing flood protection system has to be enhanced up to a 100-year-event in due consideration of interdependencies relating to waterway development.
Policy-makers finally decided to develop the critical sector from Straubing to Vilshofen according to variant A by implementing solely river regulation measures (i.e. without lock/storage) and to immediately realize flood protection measures. Therefore, two projects (navigation and flood protection) were set up and two subsections were defined for the waterway upgrading project: Straubing – Deggendorf (subsection 1) and Deggendorf – Vilshofen (subsection 2). 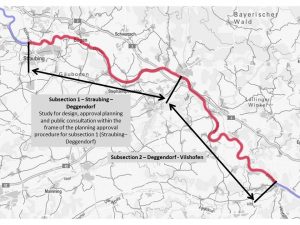 Upgrading both subsections is part of the overall development in order to improve navigation conditions in the existing bottleneck between Straubing and Vilshofen (and thus on the entire TEN-T axis) and to simultaneously enhance flood protection. The fairway is developed to increase draught by at least 0.2 m at low navigable water level (RNW). This would correspond to fairway depths of 2.20 m. Moreover, fairway maintenance, sediment management (incl. progressive bed erosion), safety and ease of shipping (incl. nautical difficulties and naval hazard spots) are to be optimized. Concerning flood prevention, the existing level of protection is to be increased from about HQ30 to HQ100.

This overall study laid out the necessary preconditions to obtain the construction permissions and budget approvals for the upgrading of subsection 1 Straubing-Deggendorf. It essentially involved planning works and the drawing up of documents in preparation of the building project. This included the draft and approval planning for section 1, Straubing–Deggendorf. Objectives of both projects (navigation and flood protection) have to be achieved pari passu in a coordinated technical planning in combination with a suitable landscape management plan. That means an interactive, interdisciplinary and iterative planning procedure of engineering and ecological measures to fulfil the technical targets was necessary. Therefore, all relevant documents to obtain the required building and financing permissions had to be prepared.

Additionally, all measures and expenditures concerning public relation and public participation were included. Plan-related public information at an early stage considerably increases project acceptance. Obligations and responsibilities under environmental law include public and stakeholder involvement. Planning approval procedures under public law therefore contain announcement, display, consultation, review, and debate of the plan which is an essential element in the administrative hearing procedure to obtain building permission.

The improvement of shipping conditions in the existing bottleneck from Straubing to Vilshofen has positive effects for the entire Trans-European Rhine/Meuse-Main-Danube inland waterway axis. It serves to support an eco-friendly mode of transport, the merging of south-eastern European states with the rest of the EU (interconnection between Black and North Sea), and, as far as possible, the unobstructed transport of goods within the EU.

As the transport of goods on the waterway Rhine-Main-Danube has an international and long-distance character, a wide range of stakeholders relating to the European transport will benefit from the waterway subproject.

Population, industry, material assets, and agriculture along the Danube in Lower Bavaria will gain a higher safety standard with regard to flood hazard.

Project leader: Project promoters/sponsors are the Federal Republic of Germany and the Free State of Bavaria, both represented by RMD Wasserstraßen GmbH. Steering group to monitor work and to coordinate/clarify fundamental issues composed of competent authorities of the Federal (State) government of Germany (Bavaria) as well as representatives of RMD. 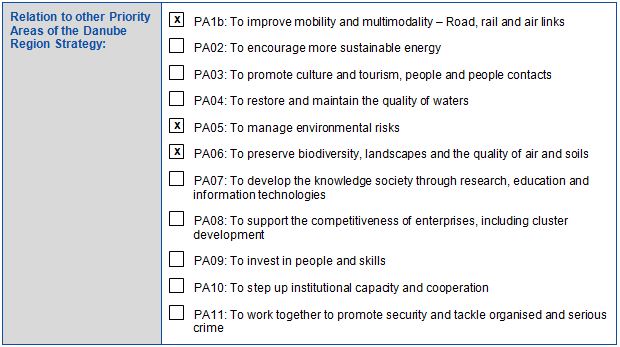 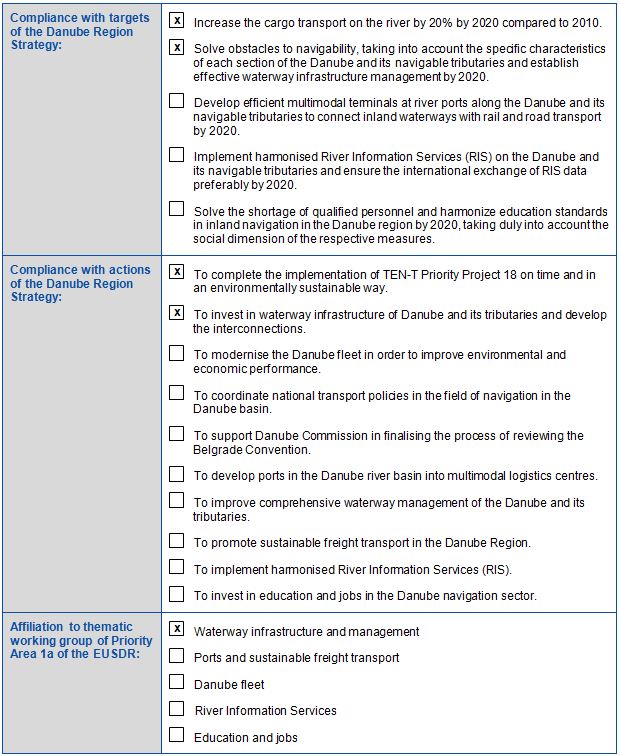 Upgrade of the Danube between Straubing and Vilshofen: Pursuing Variant A

Germany and Bavaria agreed on the realization of Variant A aiming to increase the possible draught loaded at low navigable water level by 20cm, from 1.60m to 1.80m, and the number of days per year with an effective draught of 2.50m by 56 days to 200 days/year. (This would correspond to fairway depths of 2.20m.)

In a first step urgent flood prevention measures and selected activities of Variant A will be realized in the section from Straubing to Deggendorf. In the course of the works 122 groynes and 10 longitudinal structures are being adapted and 67 groynes and 8 longitudinal structures will be newly constructed. Dredging works amount to 450,000 m³. Total costs of 208 million Euros are financed nationally (Bundesverkehrswegeplan). Costs amount to 460 million Euros including additional flood protection measures. The technical design for the approval was financed under TEN-T. The planning approval is still pending.