The main target of this study is to analyse the potential of the mentioned new inland waterway link Danube-Oder-Elbe from an economical, ecological, hydrological, transport and social point of view. On the basis of its output decisions would be made on the next steps to be taken concerning this project.

The water corridor Danube–Oder–Elbe could contribute to shift the transport of goods to the waterway and enhance the usage of the Danube waterway.

Elaboration of examination of economical effectiveness of the planned action of a water corridor Danube–Oder–Elbe including examination of ecological and other aspects (for example also quantification of contributions in the field of energy supply, flood protection and reduction of flood damage and also for direct and indirect job possibilities).

Stabilization of the route in the territory (north/Oder – connection Ostrava – Koźle, south/Morava – Danube) including elaboration of variant D+ according to assignment of the Slovak party and elaboration of recommendation for selection of the variant.

Implementation of the above-mentioned targets.

The study itself would be carried out for the territory of the Czech Republic by using the necessary inputs of other countries. Outputs of this study will be discussed with all the neighbouring countries in order to define the further procedure.

On the basis of a decision by the Ministry of Transport, the analytic study on the Danube – Oder – Elbe corridor has been withdrawn from the project INWAPO in summer 2013. Until now no decision was taken on the scope of the study.

Project leader: The appropriate project activity is under the responsibility of the Ministry of Transport of the Czech Republic
(website: www.mdcr.cz)
Address: Nábřeží Ludvíka Svobody 12, 110 15 Praha 1 / Czech Republic 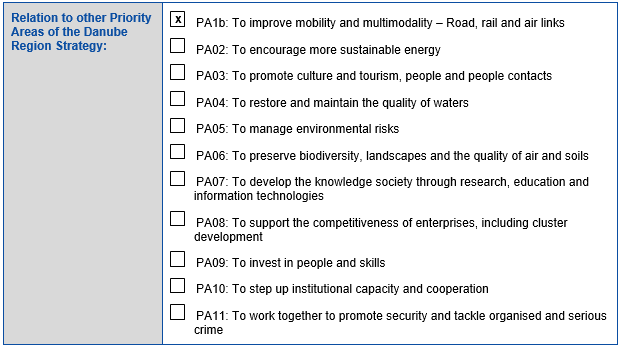 On the basis of the outputs of the study the further steps would be defined and discussed / negotiated with the neighbouring states.